State: early draft, mostly simulations with a few tests with 3-axis printer only

As I progress I will update this blog-post.

The main idea is to utilize existing 3D printing slicers but create conic slices for the Rotating Tilted Nozzle (RTN) 4 Axis Printer. ZHAW published in their announcement in 2021/01 something about utilizing existing slicers, but the details remained concealed and later published as a paper but I did not want to wait and pondered on the problem, and came up with a solution. In its current state it’s purely theoretical and untested for now (2021/02) barely tested yet.

Michael Wüthrich confirmed my solution is comparable with their solution. ZHAW planned their paper to be published sometime 2021. So, the main credit goes to ZHAW and the researchers (Prof. Dr. Wilfried Elspass, Dr. Christian Jaeger, Michael Wüthrich, Maurus Gubser, Philip Bos and Simon Holdener) there, I was just impatient and tried to find a solution with the information available.

I also adapted some of the notions Wüthrich introduced in the Novel 4-Axis 3D Printing Process to Print Overhangs Without Support Material paper, e.g. “outside-cone” and “inside-cone” printing as featured in an earlier blog-post already.

The 4-axis Rotating Tilted Nozzle (RTN) physical setup implies its slices are of non-planar conic shape, allowing to print overhangs without support structure, such as:

I also like to master the conic slices properly as they promise to become a subset of 5 axis printhead (PAX) features too – so it’s worth the effort even if the RTN itself might be too limited in its application with its fixed tilt – we will see.

In a nutshell the steps are following:

Note: the pseuco-code is incomplete as extrusion E is not yet taken care of, as soon I found a definitive solution I will write it up.

I implemented the pseudo-code with some more details like taking care of G-code E extrusion as well and fine-step linear extrusion – here some early tests using OpenSCAD as STL & G-code viewer and Slic3r as actual slicer:

Some more models with their in-between states, using Cura as model and G-code viewer:

Some close-ups of conic sliced models:

As pointed out in the previous blog-post, the RTN has two main modes of operation, outside-cone and inside-cone printing to cover outside overhangs and inside overhangs – the slicer must recognize those and switch operation mode. Further, these two modes cannot easily be mixed, and need to be segmented or separated, hence speaking of volume segmentation.

This poses significant grow of complexity from just planar slicing, the 4-axis RTN provides features to print 90° overhangs without support structure, but only when the part can be properly analysed and segmented so that those operational mode can be applied.

The difference between inside- and outside-cone printing is to change the order of conic mapping for the model and post slicing:

The pseudo-code turned into an actual application I named slicer4rtn and is a command-line tool, slicing STL into G-code:

I gonna released Slicer4RTN eventually 2021/03/22, in its early version the model currently can only be sliced for outside-cone or inside-cone printing, so the volume decomposition or segmentation needs to be done separately. For now it helps me to verify some of the 4-axis and 5-axis printer designs I work on.

As soon I built the RTN printhead on one of my printers I will post photos of the first prints. For now (2021/03) I only printed conic sliced pieces on a 3-axis 3D printer.

With conic sliced G-code there are many first layers . . .

which can be set with --slicer=<slicer> on the command line.

Starting with 0.1.0 print3r provides a slicer-independent layer with a growing list of settings:

Full list of settings you find at Print3r Github Wiki.

Yet, if you must, you can still use slicer-specific settings to fine-tune settings according your print needs and printer capabilities.

For often used settings like print quality, or filament settings, you can gather those settings and reference them in the command line like:

As external Gcode viewer for preview command yagv is used, a very basic viewer – at a later time it might be replaced.

which converts, slices and preview the Gcode.

Since the functionality of print3r is growing steadily, the requirement for proper documenation demanded its own Print3r Wiki where you find up-to-date information.

The moment you deal with more than one single 3d printer, but multiples – you want to access those with a single host: creating a cloud 3d printing facility.

After a few minutes researching the net for USB to network bridge, I realized the overhead to print via network is possible without Octoprint or some other solution, but simple ser2net and socat alone, thanks to this Github Issue by Marco E explaining his steps, so I reiterate his solution with some changes:

Each printer you like to network has to have:

As next install ser2net serial to tcp bridge per printer:

Create a file named client.cfg, you may have to change the baudrate and/or the USB device:

Start ser2net on each printer:

As next prepare the host, where all the printers will be controlled from:

First make sure you have socat installed:

The first line reports the new virtual serial port, e.g. /dev/pts/29  or enforce a link of the new device:

you can reference /dev/pts/... or the link you defined with Print3r then: 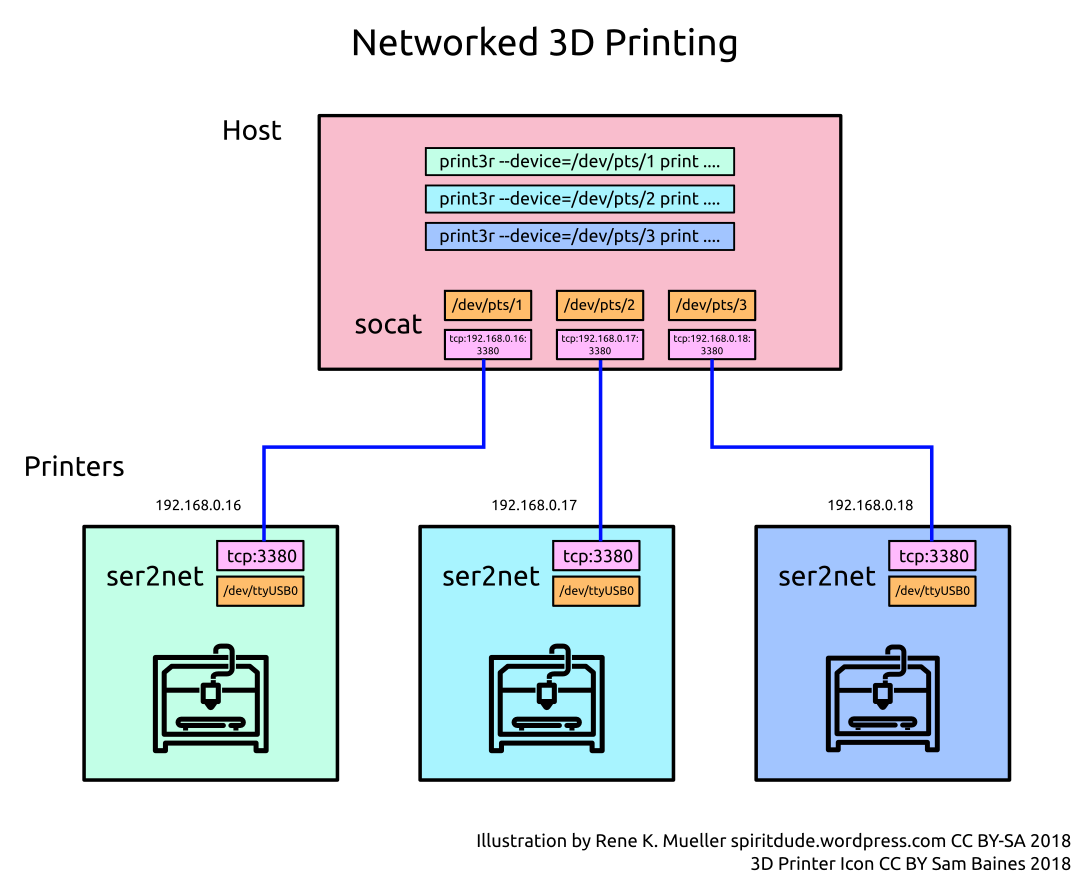 So, that’s it, with ser2net on the printers, and socat on the host you have a rather simple and straight-forward cloud 3d printing facility. 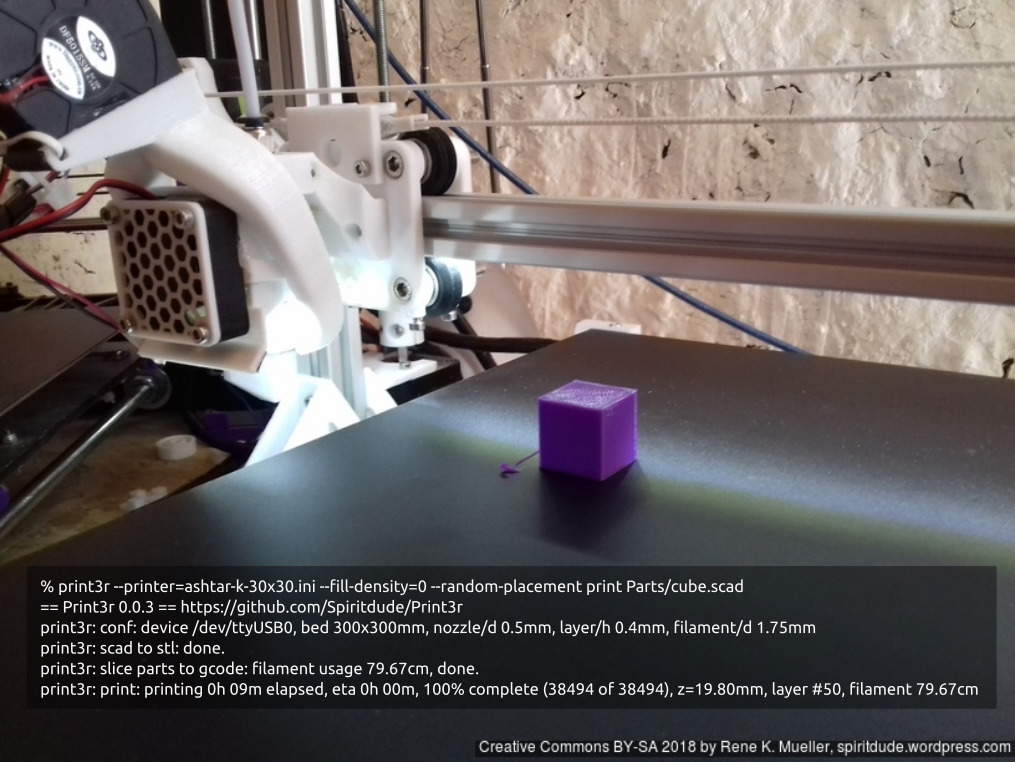 Although 3d parts need to be seen and visually so much is communicated, but Cura’s user interface feels conceptually skewed (“Prepare” vs “Monitor” tab) – and with the time I thought I want an ordinary command line interface to print parts quickly, easily multiply and random placement so the bed surface is more evenly used and not just the center – I have grown tired to move parts on the virtual bed.

So, I wrote print3r, a command line interface which utilizes Slic3r as backend. Its main features (Version 0.0.6):

More information on the printer display: progress [%], eta and layer#: 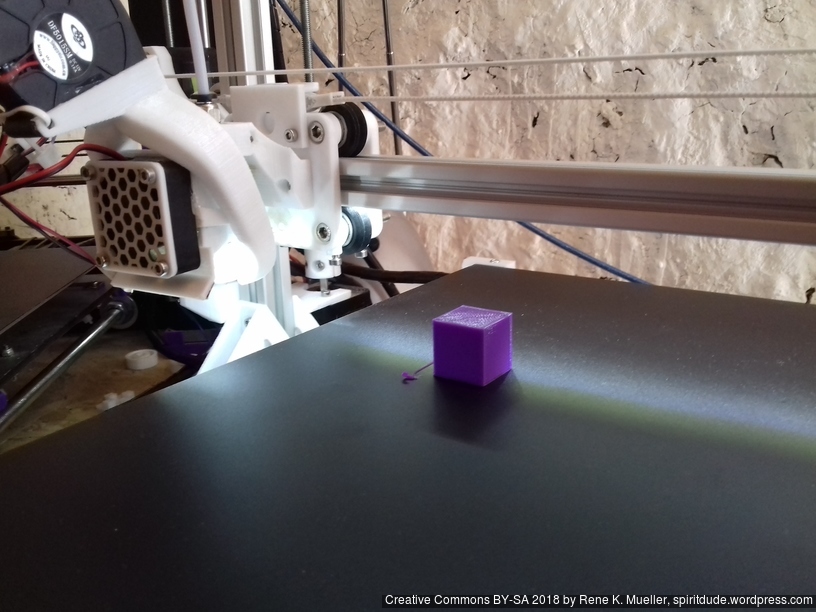 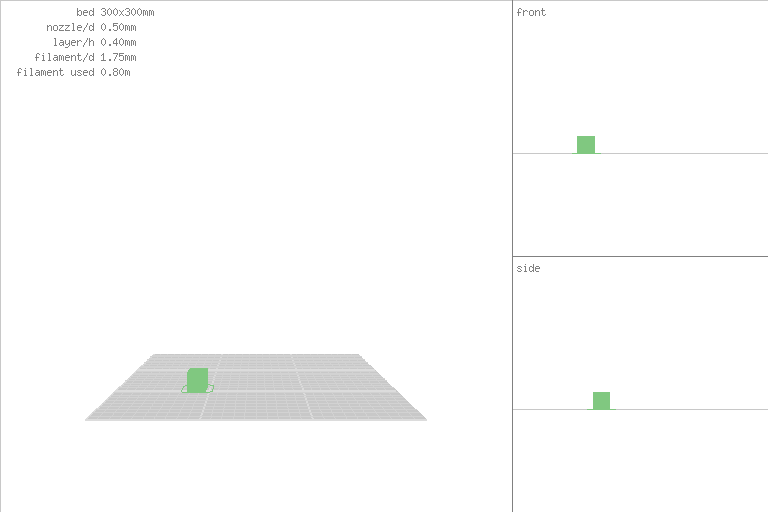